During heavy rains, Snohomish County Officials begin a “flood watch” and activate the Flood Warning Operations Center at the Department of Emergency Management (DEM) in Everett. The National Weather Service (NWS) uses information from the River Gauges and forecasts to make flood predictions. Phase 2 is the official flood stage used by NWS to issue watches, warnings, or statements. The DEM center updates the warnings based on continuous river flow and stage (water level) data received from river gauges and information from volunteer “river watches” and County Fields Staff. During the flood watch, close coordination occurs between Snohomish County’s DEM,  Department of Public Works and Sheriff’s department.

The County also coordinates with the Army Corps of Engineers about status of dikes and with emergency service agencies such as the Red Cross, for help with persons evacuated from their homes. Agency responses occur in four phases depending on the severity of expected flooding, with Phase 4 being the most severe.

To get information on flooding, keep your radio tuned to a local radio station or contact Snohomish County DEM at 425-423-7635. 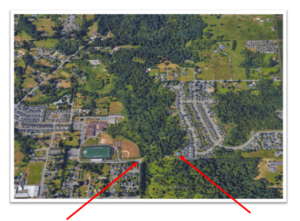